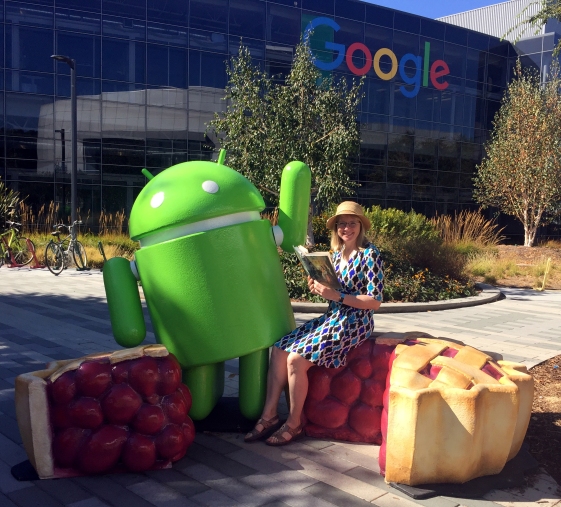 What is your favorite scene from Little Women?

It would be easy to say my favorite scene is the one I wrote about in my essay, in which Beth thanks Mr. Lawrence for the use of his piano and they become friends. I do love that scene, but there are so many others as well. I think the one that most got under my skin, and that I remembered many years later, was Jo’s disaster of a dinner party when Marmee decides to let the girls run things themselves. It shows Louisa has a wonderful sense of humor, and it’s so timeless, especially if you’re a parent of teenagers, or have ever been a teenager yourself.

Who are some of your other “imaginary heroes” from literature?

Not long before I read Little Women, I read A Wrinkle in Time by Madeleine L’Engle. The mother in that story, Dr. Murry, was a brilliant scientist and one of my imaginary heroes. She managed to conduct experiments at home, in her own kitchen, and still be there for her kids and keep house. This was a lovely notion, and I am completely supportive of efforts to encourage women in science and make science more family-friendly. But it was also an outdated model of what science is and what scientists do, even for 1962 when it was written. It reads more like how one might imagine the March sisters doing science in the 1860s—or perhaps the vision was inspired by the Curies, French Nobel Laureates Marie and Pierre and their children, who discovered radioactivity at the turn of the 20th century. Their work had a dark side, though: Marie Curie actually cooked meals on-site while they were purifying radium, and then they all died of radiation-related sicknesses. (According to Wikipedia, “Even now, all their [the Curies’] papers from the 1890s, even her cookbooks, are too dangerous to touch.”) On the other hand, I think that Meg, the daughter in Wrinkle, makes a good hero for the ages. Her sacrificial love is what saves her brother Charles Wallace.

Another imaginary hero of mine is Princess Leia. Back in the 1970s and 80s in the early movies, she took a back seat to Luke and Han. But in the more recent movies, she’s the grown up. When Carrie Fisher died, I realized how much my view of her, and of Leia, had changed and deepened over the years. She was pretty open about smoking, drinking, and doing illegal drugs when she was young. She also didn’t have the brilliant career that Harrison Ford did, post-Star Wars. When I first read her semi-autobiographical novel, Postcards from the Edge, I uncharitably thought that she sounded like a bit of a train wreck.

Then I learned more about mental illness. I experienced its effects in my own family and with loved ones. I came to admire Fisher’s openness about her struggles with bipolar disorder and addiction, and especially her tenacity, grace, and good humor in the face of what was a lifelong relationship with mental health issues. She was not only the grown-up and the tough one. She was the flawed human being at the center of it all.

Amy goes to Europe, Jo goes to New York . . . where did your pivotal “coming of age” moment take place? Have you had a “perfect” (or perfect-on-paper) Laurie in your life, only to realize it wasn’t meant to be?

I went to both Europe and New York, and I’m not sure if I can pinpoint one pivotal coming-of-age moment. I did have a rather chaotic dating life for a while in my mid-late 20s. During that time I fell in love with someone I met at a scientific meeting in Europe. But that wasn’t based in a long friendship like Laurie and Jo’s, and so it was easier to realize that it wasn’t “meant to be” once the realities of day-to-day life set in. I also had a couple of other relationships not work out and was feeling pretty down about the whole thing. And then I met a German guy, married him, and moved to New York, so I actually have a lot of sympathy with the story of Jo and Friedrich!

KL Allendoerfer is a science educator, musician, and writer. She spent her early career working in biotech and raising her children in the Boston area, where she learned to play the violin again after many years off. She loved Little Women growing up, but mostly forgot about it until she started reading her childhood copy of the book to her school-age daughter. She and her daughter then re-discovered Orchard House on a coming-of-age tour with their Unitarian-Universalist church. She now lives with her German computer scientist husband and their teenage children in Silicon Valley, California. She blogs regularly at A Thousand Finds and occasionally at Violinist.com and is currently at work on a near-future science fiction series set in the New England region of a newly federalized North America.

Visit our homepage to order your copy of Alcott’s Imaginary Heroes: The Little Women Legacy today!